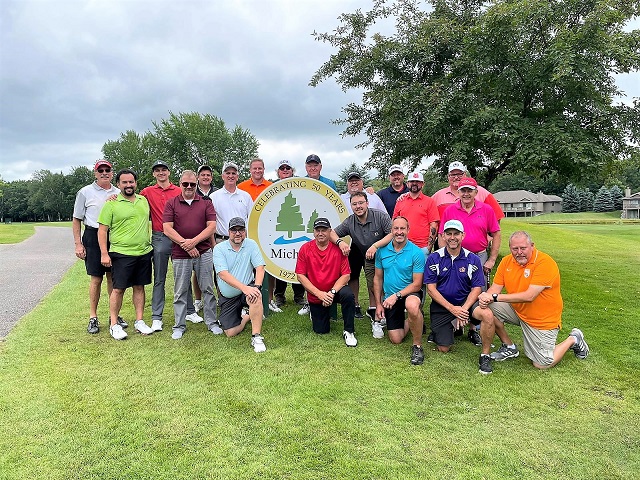 In 1994 a group of four friends who met as co-workers at a now-shutdown IT company in metro Detroit saw a 54-holes of golf promotion for Otsego Resort, an original golf and lodging member of the Gaylord Golf Mecca. They played what Joel Staniec of Troy remembers as a 54-hole blowout, stayed at Otsego Resort and enjoyed it. And they kept coming back for what became a Gaylord Golf Mecca pilgrimage.

“Our group grew, too,” Staniec said. “It got to the point friends, brothers-in-law, fathers-in-law came on the trip and we turned it into a Ryder Cup-style event.”

Larry Bailey was “The Commish” and so the competition was soon called the Bailey Cup. Staniec was the “Co-Commish,” and there was Bill Pikarski, who was part of the original foursome and is still a regular on the trip, along with Staniec. Ray Marcil Sr. was also a key part of the group. He once owned a house just off hole 18 at The Pines at Michaywe’, which gave the group a place to stay for a few years. Ray’s son Dave became part of the group and grandsons Mike and Brian played, too. Dave’s stepson, Brian Butka, is involved as well.

Sadly, Dave Marcil, whose nickname was “Amos,” passed away in 2008. His son, Mike, now goes by Amos Jr., and after Dave’s passing “The Bailey Cup” became “The Amos Cup” to honor him.

“It’s always in July, always in Gaylord and we have played all the Mecca courses now,” Staniec said. “Our favorite is still The Pines, and we always have the singles matches on The Pines on Saturday morning.”

Staniec said preparation for the trip starts in January with players committing to the trip. Then two captains are chosen and a draft is held. “We use handicaps to even it out, have two even teams and then we have fun with who gets first pick, like picking PGA Tour winners, or some other contest thing,” he said. “We get creative.”

The COVID pandemic stopped the consecutive years so the 2023 Amos Cup will be the 29th tournament. The age range is 25 to 70, and competition is in various formats Thursday, Friday and Saturday with a fun scramble event to close things on Sunday.

“We added Wednesday in there at one time, but it was too much golf for the older guys,” Staniec said. “I will be 50 this year, and the few years I missed and other guys have missed were for kids being born, weddings, those kinds of things. There is always a core 12 to 16 that go and we share all the stories.”

Staniec said there’s the story about one of the golfers being chased out of the woods by a wild turkey, and the lost 7-iron in a lake, playing in the rain and many more.

“I think we all look forward to the trip to get away from work and other things in life, to have fun,” he said.

The group is a big fan of all the courses in the Mecca, with The Pines and Gaylord Golf Club the most played options. They’ve tried different lodging experiences, including renting houses through Mecca lodging partner Pine-Cone Vacations.

“We’ve looked around at other resort areas but Gaylord is always the most economical and when we work with the (Mecca members) it’s pretty easy,” he said. “We had a great time this year. We hung out at the Alpine Tavern. We just enjoy being up there.

“Gaylord is the place, always has been the place and always will be the place.”